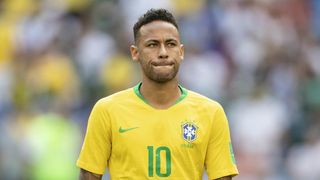 Thomas Meunier said he would be facing the best player he has ever played with when Belgium take on Neymar and Brazil in the World Cup quarter-final, saying of his Paris-Saint Germain team-mate: "I do not know how to stop him."

Meunier played the entirety of Belgium's 3-2 round-of-16 victory over Japan, which was settled by Nacer Chadli's stoppage-time strike and set up a quarter-final clash with the highly fancied South Americans.

Neymar scored the first goal in Brazil's 2-0 win over Mexico to double his World Cup tally, and Meunier admitted that keeping the 26-year-old at bay in Friday's clash would be difficult.

"I do not know how to stop him. He is very unpredictable," Meunier told Globo Esporte.

get the job done!Second-half goals from and Roberto Firmino mean that are through to the quarter-finals! July 2, 2018

"Neymar is probably the best player I've ever played with or against.

"Anyway, I'll do my best. I know we have a chance, but I also know that it is very complicated to stop them, not just Neymar. [Philippe] Coutinho, [Roberto] Firmino, [Gabriel] Jesus, Marcelo, the whole team."

Belgium have won all four of their World Cup games so far, scoring 12 goals in the process, but Meunier warned that beating Belgium would require a higher level of performance.

"They have many qualities," he said. "It's complicated. We're facing the best team in the world.

"We have a chance, but it will be quite complicated.

"I expect a difficult game. We are not favourites to the World Cup. To beat Brazil, you have to be 100 per cent, 120 per cent of your mental and physical capacity.

"It's already a final for us. We know we have quality and collectiveness to beat them, but we also know that it will not be easy."