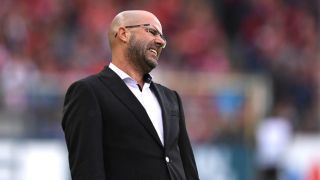 Borussia Dortmund manager Peter Bosz put club rivalries to one side on Friday to declare his sympathy for the out-of-work Carlo Ancelotti.

Bayern Munich sacked Italian Ancelotti on Thursday, less than 24 hours after a 3-0 defeat to Paris Saint-Germain in the Champions League.

The result in Europe proved to be the last straw for the Bavarian club's board, particularly after they'd suffered their worst start to a domestic campaign since 2010-11.

"First of all it is always disappointing when a colleague gets sacked," Bosz told the media.

"I feel for my colleague. I don't know exactly what happened there and I also don't know the reasons why he was fired.

"For me, as a coach and a human being, it is just disappointing when a colleague gets fired. I don't have to say more than that."

BVB yet to taste defeat in Augsburg - check the facts for September 29, 2017

"If we have to get the motivation from a coach getting fired, then this wouldn’t be good," he added.

"The motivation always has to be there and is always there. We don’t need a firing of a Bayern coach. We don't need that."

Dortmund lost to Real Madrid in Champions League action in midweek but will look to maintain their unbeaten Bundesliga record when they travel to Augsburg on Saturday.