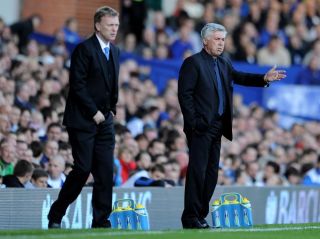 Moyes – appointed as the successor to the legendary Alex Ferguson in May last year – failed to last 12 months of his six-year deal, paying the price for United's dismal results.

The Premier League champions sit seventh in the table, a whopping 23 points behind table-toppers Liverpool, and their chances of UEFA Champions League football next season were finally ended after Sunday's 2-0 defeat at Everton.

The club's record in the cup competitions was also poor, leading to Moyes' departure, and Ancelotti – preparing his team for Wednesday's Champions League semi-final first leg against Bayern Munich – is surprised by the decision to part company.

"I feel sorry for David Moyes," said Ancelotti, who was sacked by Chelsea in May 2011.

"Unfortunately that is what happens to managers when things don't go well…you get sacked. Moyes will no doubt move to another club and get another chance to manage.

"I am a little surprised with the news because it's something that Manchester United don't normally do. They had 24 (actually 27) years with Sir Alex Ferguson at the helm.

"I am surprised that they have sacked their manager during the season."

The fall-out to United's decision continued as the Manchester United Supporters' Trust (MUST) pointed the finger at the Glazer family, who own the club.

A MUST statement also said they expected the decision to sack Moyes, but that the Glazers should be held responsible for holding the club back.

"We all understand football's a results based business and clearly the results were not good so it was no surprise that the manager paid the price for that failure," it read.

"However we believe the cause of the malaise at Manchester United runs much deeper than the single appointment of one man as manager.

"We need to look forward now and if the next manager is to have the best chance to flourish, wider issues need to be resolved to create the right conditions for success.

"United probably peaked on the pitch in 2009 and since then we've seen a gradual decline, slowed only by the genius of Alex Ferguson.

"Despite some key successes in that time, if anything the other elite European clubs have moved further ahead, while the domestic challenge has also become much stronger.

"The foundations of that early success were laid prior to the Glazer takeover with strong reinvestment of plc (public limited company) profits back into the squad recruiting players like (Rio) Ferdinand, (Wayne) Rooney and (Cristiano) Ronaldo.

"The club can (should) only spend money that it has and, unfortunately, the club's owners have spent hundreds of millions of the club's money on financial restructuring, interest and debt payments and this has limited funds available for reinvestment in the playing squad."