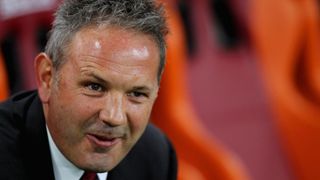 AC Milan coach Sinisa Mihajlovic believes Napoli counterpart Maurizio Sarri is not a racist and that he made a mistake with his comments.

Inter coach Roberto Mancini accused Sarri of homophobic and racist comments during their quarter-final tie in the Coppa Italia on Tuesday, which Inter won 2-0.

Sarri was handed a two-match ban in the Coppa for his comments, but Mihajlovic believes what he said does not reflect his character.

"I know both Mancini and Sarri," the Serbian said. "I think Sarri is not a racist and he made a mistake. He admitted it himself.

"Sometimes things are said on the pitch, and I know it well, even when I was playing. We coaches have to lead by example.

"The tension and the pressure makes you say things you do not think."

While Mancini decided to publicise what Sarri said to him, Mihajlovic admitted he would have handled things differently if he was in the same situation.

"As for Mancini, what we know, you have to respect his sensitivity and his character," the 46-year-old added.

"I would have handled it differently, speaking man to man, but then again it is a bad episode that has previously been condemned.

"It is not as if a war broke out anyway, so we think about football."