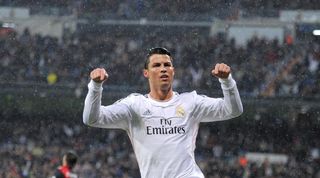 Bayern's chances of defending their title, something no team has done since Milan in 1990, will take a hit if Ronaldo is passed fit to play in the Spanish capital.

The 2013 FIFA Ballon d'Or winner has been battling knee and thigh injuries, but completed a training session on Monday and looks likely to be involved for Real – even if it is from the bench.

Gareth Bale is also a doubt due to illness, but Guardiola, who is under no illusions as to the size of the task confronting his side, told reporters that he wants to face Ronaldo.

"I'm happy to be playing against Real Madrid, but we'll need a good performance," Guardiola said.

"We will have to put in an outstanding performance to get a good result here.

"Real Madrid are a strong side. I hope Cristiano Ronaldo will play, but they have a number of good players."

Guardiola is set to welcome back goalkeeper Manuel Neuer from a calf injury for Wednesday's clash.

Utility man David Alaba is also likely to return from illness and the duo will boost a Bayern side who have eased off since winning their 24th German title last month.

Spaniard Guardiola – who said it is "special" to return to his home country for such an important match – feels his side still have room for improvement.

"It's not easy to retain the Champions League title," he added.

"I'm so proud my players are keeping up their focus…Bayern are my team and I believe we can do even better."

Bayern captain Philipp Lahm dispelled suggestions his side would try and claim a draw in the first leg and added that winger Franck Ribery will have a key role to play in plotting Real's potential downfall.

"We're here (in Spain) to beat Real Madrid and reach the Champions League final," he said.

"We need Franck Ribery to be at his best, and I'm sure he will be in top form against Real Madrid."