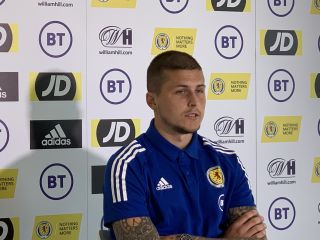 Lyndon Dykes wants to become a Scotland great after choosing the dark blue over Australia.

The 24-year-old forward was born on the Gold Coast to parents from Dumfries and began his professional career with Queen of the South before moving to Livingston and then, this month, QPR.

He had the option of representing his native country but elected for Scotland and was given a first call-up by Steve Clarke for the Nations League double-header at home to Israel and away to Czech Republic.

Dykes wants his name to be recalled alongside the likes of Tartan Army hero James McFadden, whom he played alongside at Queen of the South after arriving in Dumfries from Australia in 2016.

“Before coming in I spoke to James McFadden a lot – he was at Queen of the South with me.

“He gave me a lot of advice and before making decisions I ring him and hopefully I can maybe step up like him.

“I definitely strive for, at the end of my career, to be someone to be remembered by the fans and by everyone in Scotland.

“I think he has obviously got that. He has always been great with me.

“He taught me a lot. Hopefully I can score a couple of goals like he scored because he got some belters.

“With the squad Scotland has and the squad coming through, it is only a matter of time before they are back where they should be, in big tournaments and hopefully I can help out.”

Dykes believes he owed it to Scotland to take up Clarke’s offer of international recognition.

He revealed he spoke to Australia boss Graham Arnold, saying: “They have been great with me but I think I always knew the decision.”

The striker, who said the last couple of weeks had been a “little bit crazy”, continued: “I had positive talks with Steve before the lockdown which put a hold on everything.

“I am happy to be here. It was my decision. Scotland gave me my chance for my career.

“I have only played professional four or five years but, without Scotland, God knows where I would have been.

“Obviously I wanted to give something back to Scotland. When I am here I feel like I am at home.

“Without Scotland I wouldn’t be playing football. My family would have supported me anywhere I would have played.

“In the end it was my decision and I am happy to be here and it as great to meet the boys today.”