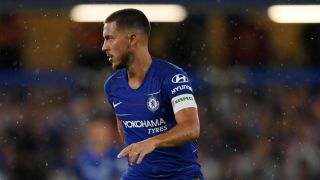 Thibaut Courtois already has his fingers crossed for a reunion with his former Chelsea team-mate Eden Hazard at Real Madrid after securing a dream move to the Santiago Bernabeu.

Courtois had long been linked with a transfer away from Chelsea, with the Belgian said to be targeting a move to Madrid to be closer to his two children who live in the Spanish capital with their mother.

His desired move was finally completed on Thursday and he was quick to risk the ire of the Stamford Bridge faithful by admitting he hoped Hazard would join him in Madrid.

"My goal was to come here, everyone knew it, but I could not say in the press. I am very happy and proud to be here," Courtois told reporters at his presentation as a Madrid player on Thursday.

"He [Hazard] is glad that I arrived because he knew it was a dream for me.

"I would like to be always by his side. He is a great player and if he could come here it would be something fantastic."

During Madrid's pursuit of Courtois, many were quick to question whether they actually needed him given the role Keylor Navas has played over the last four years.

Now he has signed, some have argued the seemingly inevitably dropping of Navas will be harsh, though Courtois is convinced he will still be able to enjoy a good relationship with the Costa Rica even if they are competing against each other.

"When I came to Chelsea I did it to replace [Petr] Cech," Courtois added. "I still talk to Cech today.

"The goalkeepers are part of a team and they are also friends. I will do everything so that there is a good feeling within the group. I will help Madrid win matches and trophies."