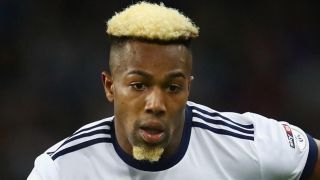 Wolves forward Adama Traore claimed he could beat Olympic sprint champion Usain Bolt for speed with a ball at his feet after being named the fastest player on FIFA 19.

The former Barcelona attacker was announced as the quickest player on the popular game at the EA Sports FIFA Ratings Awards in London and he welcomed comparisons to Jamaican athlete Bolt, who holds the 100metre and 200m world records.

Bolt is currently training with A-League side Central Coast Mariners and while Traore admitted the 32-year-old would still outstrip him on the track, he backed himself to win on the field.

's world's fastest player Adama Traore and gamer attended the launch in London yesterday. Here are some of the best bits from the event.September 21, 2018

"It is nice to be known on FIFA 19 as the fastest player in the world," said Traore.

"But Usain Bolt has started playing for Central Coast Mariners so I might have a rival next season. Just remember, Usain didn't have to dribble a ball while he was winning his gold medals!

"Clearly Bolt would beat me over 100 metres on the track. But on grass, over 30 metres with a ball at my feet? I'm winning that race every time.

"I usually sprint for 20 to 30 metres – occasionally 50 to 60 metres maximum. But no footballer ever sprints a complete 100 metres during a game.

"Likewise, Bolt trains to last the full 100 metres – he doesn't adjust every five metres to keep a ball under control."

Traore has scored one goal in his four Premier League appearances for Wolves since becoming the club's record signing.

The former Middlesbrough star came off the bench to score the winner as Nuno Espirito Santo's side beat West Ham 1-0 and he is backing the likes of Ruben Neves to fire Wolves right to the very top of European football.

"We are a very ambitious club," he said.

"Everyone knows what a good player Ruben Neves is and I have no doubt he could play for massive clubs like Manchester United, Barcelona or Real Madrid one day.

"He has the right mentality to succeed at the highest level and I am convinced he will play for a big club in the Champions League before long.

"Hopefully that team will be Wolves – and we can give him the stage he deserves to play on.

"This club is going the right way and I hope Ruben is able to stay with us for a very long time.

"Wolves against Barcelona in the Champions League one day – why not?"