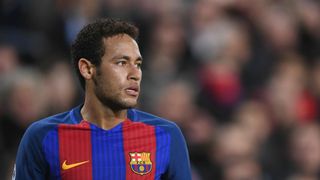 La Liga president Javier Tebas wants Neymar to return to Spain, with the Brazilian continuing to be linked with a sensational move to Real Madrid.

Paris Saint-Germain paid a world-record fee of €222million to sign Neymar from Barcelona in August and he has scored 26 goals in 24 appearances in all competitions for the Ligue 1 leaders.

Speculation linking Neymar with Madrid has been constant, however, and PSG defender Marquinhos suggested this month Spanish media outlets are trying to unsettle the player ahead of the two sides' Champions League last-16 tie.

Tebas, who threatened to block Neymar's move to Paris over Financial Fair Play concerns, would be happy for the Brazilian to make the switch to Madrid.

"I would like Neymar to return to Spanish football," Tebas told reporters at the Spanish Sports Press Awards.

"Next season there will be VAR," he said. "We are doing our best and we will ensure it arrives on time.

"With VAR, some moments in the Barcelona and Alaves game, for example, would've changed."

Barcelona survived a late penalty appeal in the 2-1 victory on Sunday when defender Samuel Umtiti appeared to block a shot with his arm, while Gerard Pique handled the ball in the build-up to the equaliser scored by Luis Suarez.