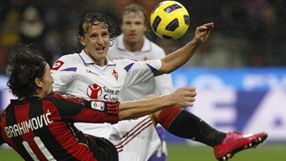 Ace striker Zlatan Ibrahimovic acrobatically converted a cross into the box on the stroke of half-time at a rainy San Siro to give the Rossoneri a four-point lead pending second-placed Lazio's visit to Parma on Sunday.

Ronaldinho was kept on the bench for last weekend's derby win over Inter for tactical reasons but the Brazilian remained in the dugout again against Fiorentina following news he had left a bar after 2am on Thursday.

Milan coach Massimiliano Allegri, fast winning plaudits from pundits who thought the ex-Cagliari boss was too green for such a big job, said Ronaldinho's behaviour did not befit an athlete.

Even with Filippo Inzaghi out for the season and fellow forward Alexandre Pato also injured, Ronaldinho was only called upon with four minutes left given Ibrahimovic's immense form.

Milan furiously appealed for two handballs in the box as the sought a killer second goal and nerves showed at the end when the visitors pushed hard for a leveller.

Fiorentina's Per Kroldrup was sent off for swearing.

AS Roma earlier beat Udinese 2-0 with two superb strikes to boost their confidence ahead of their crunch Champions League clash with Bayern Munich.

Last term's Serie A runners-up, who had a poor start to the season, powered up into third spot.

In-form Udinese began the brighter but Jeremy Menez reversed the flow when he danced past two defenders before firing home.

On-loan AC Milan forward Marco Borriello turned with aplomb to make it 2-0 after the break before team-mate Nicolas Burdisso was dismissed following a tussle and visitors Udinese had a late German Denis effort ruled out for offside.