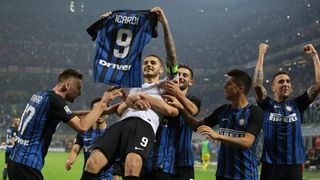 Icardi has been in sparkling form again this season, scoring 13 goals in as many Serie A games as the Nerazzurri lie second in Serie A heading into this Saturday's away clash with Cagliari.

That scoring streak has unsurprisingly seen the 24-year-old linked with a big-money move to European champions Madrid, but Spalletti has confidence his captain is happy at San Siro.

When rumours of Madrid's interest were put to Spalletti in his pre-match news conference, the Inter boss replied: "Who does not want Icardi?

"I love him at Inter and when I talk to him I can sense that the city, his team-mates, the club, the fans are all things to which he is strongly attached.

"I am convinced he can stay at Inter forever."

4 - Prior to Icardi the last Inter's player to reach the double figure of league goals in 4 season in a row was Christian Vieri. Consistent.October 24, 2017

Inter are two points behind Napoli at the top of the table and two ahead of champions Juventus, with Spalletti stressing the importance of continued hard work if his players are to ensure they remain in the title race.

"For now there is not [a gap to the top teams] anymore, but we have to carry on what we have done," he said.

"Every match, we have to start from scratch and put our quality on the field. We must play without respite - that is our motto."