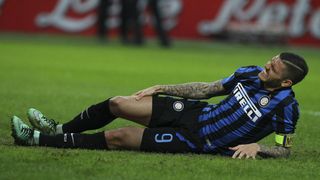 A knee strain for Mauro Icardi during Inter's 2-1 win over Bologna in Serie A on Saturday and an impending ban for Rodrigo Palacio has left Roberto Mancini with concerns a week before an important clash with Roma.

Icardi was replaced by Geoffrey Kondogbia after just 11 minutes at San Siro, with the club confirming he suffered a knee strain, though no details on the extent of the problem were made known.

Mancini's potential attacking troubles ahead of next Saturday's clash with third-placed Roma worsened when second-half substitute Palacio picked up a yellow card in the 93rd minute, meaning he will serve a suspension.

Victory moved Inter to within two points of Luciano Spalletti's team, who play their game in hand against Udinese on Sunday.

However, Mancini will be sweating on the fitness of Icardi ahead of the trip to the Stadio Olimpico, which could have huge ramifications in the race for Champions League qualification.

"Clearly, in losing Mauro so early we missed his presence in the box. We still created chances, but overall it was a good performance," he told Sky Sport Italia.

"It's disappointing for Mauro, as we don't know the extent of the injury yet, and for Rodrigo, who is a major player.

"There are another eight games after Roma, but clearly a positive result will leave the race wide open. It's an important game."

The Inter coach was frustrated by a nervy ending to the meeting with Bologna following Franco Brienza's 90th-minute goal.

"We made life complicated for ourselves at the end in a game where we’d risked practically nothing," he added.

"We cannot make mistakes like that when 2-0 up in the last three minutes.

"Bologna were in an excellent period of form and rarely conceded, so we knew it would be difficult to break the deadlock."