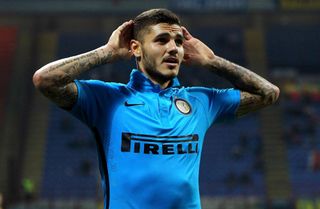 The Argentinian has been in good form in the early weeks of the campaign, netting seven goals in 10 appearances in all competitions for the club.

Inter have faltered in Serie A and are 10th after six matches, but Icardi's displays have led some to suggest he may be offered an improved contract.

The man himself says he has heard nothing of any such agreement, but has reiterated his desire to remain at San Siro.

"On the renewal I don't know anything yet," he told Gazzetta dello Sport. "But I chose Inter, and I want to stay here.

"I want to stay because here we have a desire to build something. Because Milan is a great city, because the president [Erick Thohir] has very clear ideas and because... because I want to stay here!

"This is a new team, and a young one. Winning will take time, but that's what we all want to do.

"Three reasons to believe in Inter? One: because I like this squad and the work the club is doing.

"Two: because there are many young players with a desire to win, because they haven't won anything before.

"Three: we are a united squad, on and off the field."