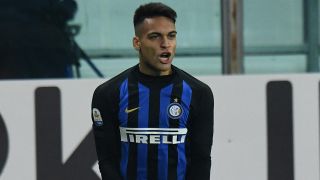 Lautaro Martinez hopes Mauro Icardi's situation at Inter is "resolved", labelling the forward a key player for the Serie A side.

Icardi was stripped of the captaincy and left out of the squad for the trip to Rapid Vienna as Martinez's first-half penalty lifted Inter to a 1-0 win in the Europa League last-32 first leg on Thursday.

Martinez said the 25-year-old needed to work out his situation with the club's hierarchy.

"Icardi? Mauro is an important player for us," the Argentine forward said.

"It's a situation that needs to be resolved with the top brass. We just need to think about playing."

Martinez's goal was his seventh of the season for Inter, the side he arrived at from Racing Club in July last year.

| FT | #RapidInter 0-1 #Lautaro's spot kick means we take a lead back home to Milan for the return leg in a week! #UEL#ForzaInterpic.twitter.com/trLrktSQxs— Inter (@Inter_en) February 14, 2019

The 21-year-old said he was happy to be on the scoresheet again for Inter, who host Sampdoria in the Serie A on Sunday.

"For me, it's important that I scored the penalty: I missed the last one I took against Lazio in the Coppa Italia," Martinez said.

"Nevertheless, I have confidence in myself and therefore I'm happy. A striker always needs to score.

"I want to continue on this path, something which involves working hard and thinking about giving my all.

"We've managed to get a positive result, and now we'll be able to train calmly to prepare for our upcoming matches."