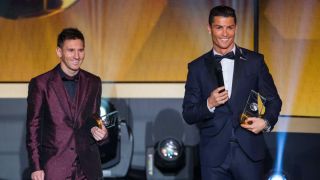 Cristiano Ronaldo has admitted to coveting a particular asset of his Ballon d'Or rival Lionel Messi, who he believes stands a greater chance of being named the world's best player.

The Real Madrid forward is part of a three-man shortlist for the award, alongside Messi and Brazilian star Neymar, with the winner due to be announced at a ceremony in Zurich on Monday.

And in what some would argue was an uncharacteristic moment of humility, he has claimed either of the Barcelona men are more likely to pick up the prestigious prize following their club's impressive year.

Furthermore, Ronaldo revealed his admiration for Messi's left foot, as he expressed his delight at being part of the glamorous proceedings once again, having claimed the prize on each of the past two occasions.

"If I'm here it's because I deserve it and because of the season I had, because of my individual performances," he said.

"Maybe Messi or Neymar has a better chance, but I am here for a reason. Coaches and captains have voted for me. I would not be surprised if one of the others wins. I know that on a team level things are different.

"I don't feel pressure to win the Ballon d'Or. I am just happy to be here again. It is an honour. I would like to have Messi's left foot. His left foot is very good."

Reflecting on the work he has put in to reach the summit of the world game, Ronaldo focused on his perseverance and ability to thrive under pressure as two critical elements in his rise to the top.

"Some of the most important words in my life are dedication and hard work. You have to be a professional and be serious. It is not a coincidence that I am here for the eighth time," he said.

"We all have talent, but talent without the work is nothing. So I am pleased to be here. I want to keep breaking records. I love to play football and to break records.

"In the beginning of my career, when I signed for Manchester United, I asked for number 28. But the coach told me I was going to wear number seven. I was a bit afraid at first because I knew Beckham had worn that shirt. But I accepted the challenge and it has been my lucky number since. I have won so much with this number."

With the award ceremony taking place at FIFA HQ – the epicentre of recent corruption allegations and site of many arrests which have rocked the footballing world – the Portuguese did not want to be drawn on the murkier side of the game.

"There is corruption everywhere in the world," he said. "These things not only happen in football. We just try to focus on playing football."