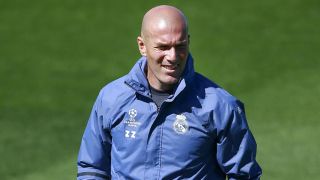 Zinedine Zidane says he understands what failure to get results means at Real Madrid and insists he is relaxed over his future as head coach.

The Madrid boss has just over a year remaining on his contract at the Santiago Bernabeu and there has been speculation over his security in the role despite his side fighting to win LaLiga and the Champions League this season.

Zidane is loving life in charge of the club he joined as a player from Juventus in 2001 and is fully aware of the consequences of failure.

"I love this club, it is in my heart, but I know where I am," he told reporters ahead of Saturday's game at Granada.

"At Madrid, you need results and that is what you are dependent on. The club is like that. I want to be at this club, I came here nearly 17 years ago.

"But when you don't get good results, you go home, it is like this, and I have this in mind. I'm well aware of that, but it doesn't stop me from keeping on working, dreaming and trying to win.

"During my career, I have always tried to win everything. The truth is that I am trying to do the best possible, but I know the game well.

"The president has given me the honour of coaching this great club. Every day I am going to manage it with a lot of excitement and with a tremendous desire to keep learning and progressing.

"People are going to express their opinion - be it positive or negative - and I can't change that. What is said outside doesn't matter."

Zidane, who led Madrid to Champions League glory last season, added: "What I'm interested in is trying to keep on moving forward.

"Above all, being at this club - which is the best thing that's happened to me in my professional career - is what drives me.

"I'm not worried about anything but at the moment we haven't won anything. We will see at the end of the season.

"We could win two, one or end up winning nothing. The only thing I can say is we must keep going every day until the last minute of the last match."