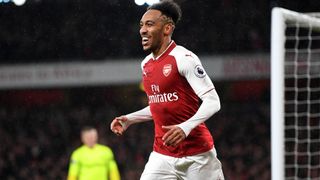 Arsenal forward Pierre-Emerick Aubameyang insisted he would only get better after impressing on debut for the Premier League club.

Aubameyang, a £56million arrival from Borussia Dortmund on deadline day, marked his Arsenal debut with a goal in a 5-1 thrashing of Everton Saturday.

The Gabon international may have shown good signs on his debut, but the 28-year-old said he would improve.

"Of course I was really happy," Aubameyang said, via the club's website.

"We won the game in the first half and the second was a bit different. We are all happy.

"Is there more to come from me? I think so."

Aubameyang arrived at Arsenal after making a strong start to the 2017-18 season with Dortmund, scoring 21 times in 24 games in all competitions.