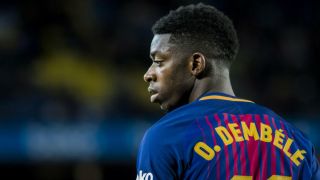 Ousmane Dembele is back in training with Barcelona but will not take part in Sunday's derby against Espanyol, as Ernesto Valverde insists he will be "careful" bringing the Frenchman back from injury.

The 20-year-old winger has endured a miserable start to life in Catalonia with respect to injuries, tearing his hamstring in just his second LaLiga outing, ruling him out until January.

He then suffered another hamstring problem against Real Sociedad on January 16, in his second match since returning to fitness, and was expected to be out for a further four weeks.

Dembele appears to be ahead of schedule in his recovery, having taken part in full training on Saturday, but Valverde has urged people not to get too carried away, adamant the attacker is not going to be risked on Sunday.

"Dembele is not here to play," Valverde told reporters.

"We'll try to be careful with him; he's part of the [training] group. We'll see when he's going in. I'm not a risk-taker."

Much of the build-up to the derby clash has centred around comments made by Gerard Pique after their Copa del Rey tie in January.

The defender referred to Barca's neighbours as "Espanyol de Cornella", implying they should not be considered a Barcelona club following their move to nearby Cornella de Llobregat, but that will not come into Valverde's reckoning when picking the team.

"I'm not thinking of anything other than putting the best team to win tomorrow [Sunday]," Valverde said.

"Complaints are part of the rivalry. We are rivals; the coaches and the players, and also the team-mates. On the field each one is going to give his own. There is tension in the matches, the rivalry, but there is not much more to it than that – it is a football match.

"I do not care [about a hostile atmosphere]. It's a lot of noise, but it's normal."

Valverde also addressed suggestions that Yerry Mina has not impressed in training, dismissing those reports by insisting the Colombian is available to play.

"Mina could play, he's called into the squad," Valverde added.

"I have to decide between one player and another. So far I've decided to leave [Samuel] Umtiti and Pique [in the team]. He [Mina] has already passed his adaptation. I've just preferred other players until now."