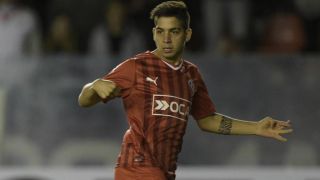 The 21-year-old has established himself as a key figure in Mauricio Pellegrino's squad since making his senior debut in 2011 after graduating from the club's academy.

Independiente vice president Noray Nakis confirmed the Spanish giants had put in a bid for the attacker, however the club are reluctant to let him go.

"[Benitez] is a very important player for us," Nakis told AS.

"We do not accept the offer from Madrid for them to then send him on loan to another club.

"Madrid want him to go to another club to get more experience.

"Martin is very good and he has potential, so because of that, if he leaves he must go there directly to play."