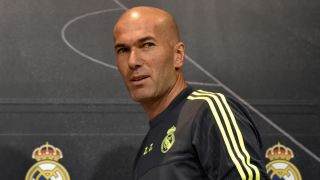 Zinedine Zidane has what it takes to be a success as head coach of Real Madrid, according to Castilla defender Diego Llorente.

Madrid and France great Zidane was appointed as Rafael Benitez's successor on Monday and will take charge of his first game at the Santiago Bernabeu on Saturday against Deportivo La Coruna.

Zidane spent time as Carlo Ancelotti's assistant with Madrid's first team before taking over as Castilla coach in June last year, with Llorente revealing he stayed with the reserve side due to the Frenchman's appointment.

Llorente - now on loan at Rayo Vallecano - revealed what Madrid's first-team squad can expect and backed his former coach to succeed.

"There will be intensity right from the off," the Spain Under-20 international told FIFA.com.

"I had the chance to leave Castilla last year but when I heard that Zidane was going to be the coach, it was just one of the reasons why I decided to stay put.

"To learn from a legend was an amazing opportunity and it galvanised the squad right from the start. People say that he has no experience but this is Zidane we're talking about.

"He might not have much experience in coaching but it's very important for a player to have a coach who has been through as much as he has and who understands us well. I think you're going to see that now with Real Madrid.

"He's got the knowledge. He knows what Real Madrid is all about and he commands respect. That's something the players value and I'm sure they'll be right behind him. He'll do well."