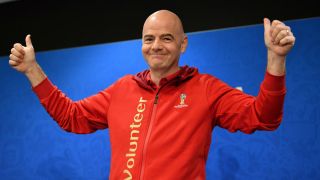 FIFA president Gianni Infantino has proclaimed Russia 2018 to be "the best World Cup ever".

The finals have largely been considered a major success by visitors and viewers across the world, particularly in light of concerns about Russia's suitability as hosts.

Organisers have been praised for an efficient running of the tournament across the 11 host cities, while there have been few recorded incidents of travelling fans being subjected to the sort of racial or homophobic harassment that was initially feared.

With the football itself largely engaging throughout the tournament, Infantino had no hesitation in describing 2018 as the World Cup's finest year.

"A couple of years ago, I said this would be the World Cup ever. Today, I can say that with new conviction. It is the best World Cup ever," he told a news conference in Moscow.

"We had 98 per cent stadium occupancy, more than one million fans travelling from abroad, more than three billion viewers on TV. In FIFA's digital channels, content has been viewed more than 11 billion times, there were seven million visitors to the fan fests, great, great success with VAR, and anti-doping has delivered unprecedented tests and so far, touch wood, zero positive results. We have been acting against discrimination with a new way of operating with FARE and others.

Today, we witnessed our first 0-0 of the tournament Don't cry because it is over, smile because it happened June 26, 2018

"But there is the football side, and we had only one game that ended 0-0, and we had some great games, all had a lot of emotions, and on the organisational side, the level of excellence in the infrastructure in the stadiums, airports, hotels, transportation, security, the level of operational excellence has been really, really unprecedented, and that's not only me saying it, it's others who have been at several World Cups and championships. And a great party, an extremely friendly atmosphere throughout, from beginning to end."

One notable aspect of this tournament has been the use of VAR at a World Cup for the first time, which Infantino considers to have been a resounding success.

Indeed, the former UEFA general secretary believes the days of goals scored from an offside position or red cards for violent conduct could both be coming to an end due to the video assistant technology.

"The results are extremely clear and extremely positive," he said. "Over 440 checks so far, 19 reviews in the 62 matches, there were 16 decisions changed from a wrong decision to a right decision, so when you check vocabulary and the word 'progress', progress means to make things better compared to the past. This is progress, this is better than the past.

"VAR is cleaning football, helping referees to make the right decisions in a very difficult job. Of the checks we made, 95 per cent were already correct, and thanks to VAR we increased to 99.32 per cent. It's not 100 per cent, but it's 99.32 per cent, which is better than 95 per cent.

"The offside goal is finished in football, at least in football with VAR. Either you are or you're not offside. And this is over. How many times have you written in the past whether he was offside or not? It's finished.

"Look how many red cards there were for violent conduct in the last World Cups. In this World Cup, so far, zero. Why? Not only for VAR but everyone knows if you do this [elbow] in the face, someone will see it and then you will be sent off. It's difficult to think about the World Cup without VAR. We'll see what we can improve in future."