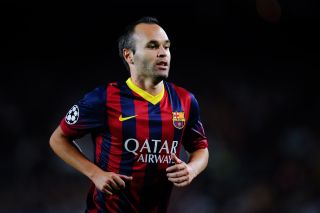 The Spain international midfielder - whose current deal expires in June 2015 - had reportedly been stalling on a new contract.

Iniesta, 29, was linked with a move away from Camp Nou, with Manchester United and Manchester City among those said to be interested in his services.

However, doubts over his future with the Catalan club appear to have been allayed after vice-president Josep Bartomeu stated that an agreement is close to being reached.

"The negotiations are under way and both sides want to sign," he told BTV.

"Iniesta's new contract will be the maximum allowed of five years."

Iniesta has been an integral part of Barca's success in recent years, winning six La Liga titles and three UEFA Champions League crowns with the club.

The FIFA World Cup winner has made over 450 appearances for Barca, scoring 45 goals.