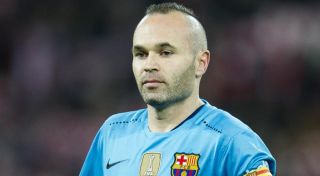 Andres Iniesta had a simple explanation as to why Barcelona's narrow 2-1 victory over Malaga at the Rosaleda was so tough.

The European champions needed some divine intervention from Lionel Messi - who scored the winner with a sublime volley - to secure the three points from a tough away assignment.

But Iniesta said this was the least you should expect when playing away in La Liga.

"It’s not easy to win in la Liga, today was a really important game for us to win, those three points keep us at the top," the Spain playmaker said.

"At the start of the game we got a bit ahead of ourselves with that goal after a minute, and went in at half-time 1-1, probably a bit unfairly to be honest when you look at what they did and what we did.

"Things changed in the second half."

The league leaders made a number of uncharacteristic mistakes in the first half, which saw the teams enter the break level at 1-1, and the midfielder had difficulty explaining what the root cause of the uncertain first-half was.

"I can’t explain it. It’s not easy. There was a lot of imprecision, we weren’t comfortable. Malaga were always in the right place to take advantage of our mistakes," he continued.

Despite the error-riddled performance, Iniesta was happy to retain top spot in the league, but said the challenge of beating title rivals Atletico Madrid in their next league game would be even tougher, saying: "Atletico will be there until the end fighting for the title, first we have to concentrate on beating Athletic, then we’ll think about La Liga."

Barca have a narrow one-point lead over Atletico after Saturday's win.