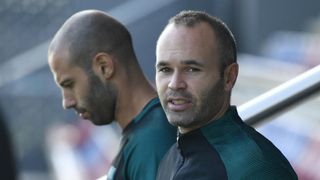 Javier Mascherano has been forced to miss Barcelona's LaLiga clash against Athletic Bilbao with illness, while Andres Iniesta is absent with a thigh injury.

Both players missed training on Friday, with Iniesta ruled out, before the club also confirmed on Twitter Mascherano would play no part at the San Mames.

Jordi Alba has returned from three games out with a thigh injury, however, and is fit for the trip ot the Basque Country.