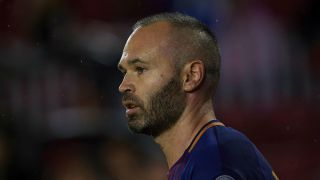 Andres Iniesta and Javier Mascherano missed Barcelona training on Friday ahead of Saturday's trip to Athletic Bilbao, the club have confirmed.

Barca, seeking to keep their unbeaten start to the season intact, face the potentially tricky task of travelling to coach Ernesto Valverde's former side on Saturday.

However, they may have to go to Bilbao without captain Iniesta or Mascherano.

Iniesta, who has played eight times in LaLiga this term, has picked up a thigh problem, while Mascherano is suffering from a fever, with the Argentinian likely ruing his luck after struggling to hold down a first-team place under Valverde.

Thomas Vermaelen (hip) also missed training, with the Belgian's only appearance this season coming in the Copa del Rey win over Real Murcia on Tuesday.

Training with all the available players from the first team plus Ezkieta from Barça B October 27, 2017

Mascherano with a fever, Iniesta with a thigh problem and Vermaelen with a hip problem do not train today October 27, 2017