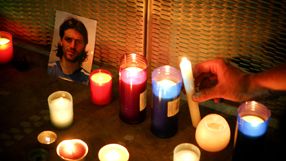 Jarque, Iniesta's close friend, collapsed and died aged 26 on a pre-season tour of Italy in August 2009.

After scoring his dramatic goal against Netherlands late in extra time in Johannesburg in July, Iniesta tore off his shirt to reveal a white vest inscribed with the words "Dani Jarque siempre con nosotros", or "Dani Jarque always with us".

At a special ceremony at Espanyol's stadium on Thursday, Iniesta, who plays for the club's city rivals Barcelona, presented the shirt to president Daniel Sanchez Llibre and appeared close to tears when making a short speech.

"It's going to be difficult not to get upset," said Iniesta, whose goal and celebration in the 1-0 victory at Soccer City were watched by hundreds of millions of people around the world.

"It pains me a great deal to give this shirt away even though I think this is the best place for it," he added. "I scored the goal but Dani will also be remembered."

The ceremony was attended by members of the Jarque and Iniesta families, Espanyol players and staff and the presidents of the two clubs and the shirt will be incorporated into a mural dedicated to Jarque near gate 21 of the stadium.

Espanyol president Sanchez Llibre presented Iniesta with a medal and praised him for making such a generous gesture.

"He (Iniesta) is a great player, but for sure he will also be remembered with great fondness by the Espanyol supporters and the world of soccer when he retires," he added.