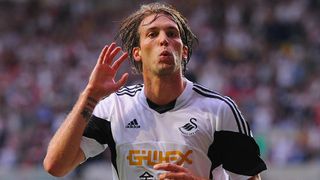 Real Oviedo forward Michu has confirmed his retirement from football after receiving an assessment on the condition of his right ankle.

The 31-year-old Spanish striker has struggled with a recurring ankle problem for the last five years and, despite making 27 league appearances for Oviedo last season, made an emotional statement on the his decision to hang up his boots.

In a message posted on Twitter, Michu addressed the game of football and thanked the sport itself for his experiences during a 14-year career.

"According to medical reports, the current situation of my right ankle has come to a point where it has forced me to say goodbye to you as a professional player today," he said.

"I feel privileged to have fulfilled a dream that is shared by so many of us since childhood. The dream of becoming a professional player in this sport.

"The public have given me an invaluable affection that I will never be able to repay. Indeed, I feel I have done nothing to deserve it all."

Michu started his senior career at Oviedo in 2003 and made 100 league appearances before joining Celta Vigo.

He went on to play for Rayo Vallecano and then enjoyed a successful three-year stay in the Premier League with Swansea City, before returning to Oviedo in 2016 after a loan spell at Napoli and a brief time at Langreo.

Michu was one of a number of Premier League stars who bought shares in Oviedo when the club faced a financial crisis while languishing in the third division, and they have since risen to the second tier, having regained some stability off the field.

He paid tribute to the club's fans, saying: "I wish to make special mention to Real Oviedo because this club has taught me all that I have been able to do on the pitch.

"I also address a special though to all its supporters around the world. Without them, I would have never been so happy throughout this journey."

A spokesperson last week indicated Michu intends to pursue a career in coaching following the culmination of his playing days.