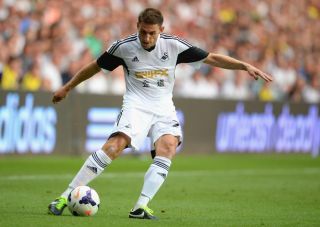 Rangel was withdrawn 13 minutes from time in Saturday's 4-1 win over Aston Villa, which saw Swansea confirm their top-flight status for another season.

However, after undergoing a scan on Tuesday, the Spaniard will now miss Swansea's last two matches against Southampton and Sunderland.

Head physiotherapist Kate Rees told the club's official website: "Angel has been diagnosed with a grade 2 adductor strain (groin) which will keep him out of action for two to three weeks."

The victory over Villa ensured Swansea won back-to-back league games for the first time since December 2012 and Rangel urged his team-mates to continue that good form in his absence.

"It's been a really difficult season for us but we have fought until the end," he said.

"It looked as though we might struggle but with two wins we look like we could finish above 12th.

"Our aim is to get more than 40 points and we have the chance to do that with six points to play for. Let's see what we can do and how high we can finish."