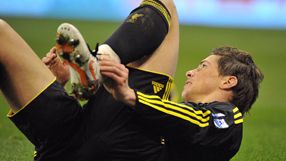 The 26-year-old, who picked up the injury in Saturday's 2-0 Premier League defeat at Stoke City, will be further assessed by Spain's medical staff, the club said in a statement.

Torres had only recently returned to form after a poor spell in a struggling Liverpool side, scoring three times in as many games, including both goals in a 2-0 win over Chelsea this month.