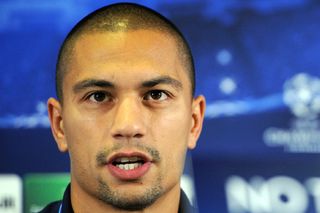 Rafael Benitez's men will be looking to recover from a 2-0 loss sustained at Group F-leaders Arsenal last time out, when they face Elie Baup's Marseille at the Stade Velodrome.

Inler hopes he and his Napoli teammates can focus on producing a quality effort in such a vital game to the outcome of the group.

"Tomorrow's match is important both for us and them," the Swiss midfielder said.

"We need to make a great performance because we want to achieve great results, therefore we have to be concentrated and determined."

While Inler's confident of a victory, he has warned his team-mates to approach the game with caution, citing Marseille's French midfielder Mathieu Valbuena, in particular, as a major threat.

"We know Valbuena's skills very well and their team is also very strong so we have to be careful and to try not to leave any empty space," Inler said.

"We should try to play as we're able to play and prove our skills on the pitch.

"Marseille is very similar to Napoli - a few friends of mine have played in this team and described the atmosphere at the stadium and their supporters have a real passion for football.

"I really like such stadiums; therefore it's going to be a beautiful match tomorrow."