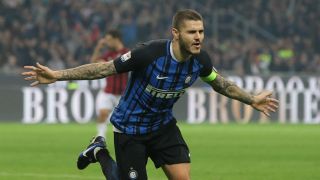 Mauro Icardi completed a superb hat-trick from the penalty spot in the final minute as Inter snatched a pulsating 3-2 win over AC Milan in the Derby della Madonnina.

Luciano Spalletti's team remain unbeaten this season and move above champions Juventus up to second in the Serie A table but they were made to fight hard by their neighbours after half-time at San Siro.

Icardi's instinctive finish from Antonio Candreva's pinpoint 28th-minute cross preceded a passage of play before the interval when a Milan side still bedding in after their frantic close season in the transfer market appeared increasingly overmatched.

But Vincenzo Montella's decision to bring teenage forward Patrick Cutrone on for Franck Kessie at the break proved inspired and the Rossoneri were level when Suso stylishly picked out the bottom corner from long range.

Inter unexpectedly found themselves on the ropes and were indebted to Samir Handanovic's stunning reaction save from Giacomo Bonaventura before Icardi started and ended a 63rd-minute counter-attack, crowning it with a brilliant volley.

Milan's head coach is likely to face more speculation over his future after a fourth defeat in eight Serie A matches but his team's spirit could not be called into question in the 81st minute when Bonaventura turned the tables on Handanovic – the goalkeeper fumbling over the line to be credited with the own goal.

There would be a further twist when Ricardo Rodriguez was adjudged to have impeded Icardi at a corner and the Argentina striker proved to be the coolest man in a stadium ramped up to fever pitch.

Inter could not have anticipated such a breathless finale as they took control early on. Borja Valero came infield with some clever footwork after 13 minutes and found Candreva, who unleashed a right-footed shot against the top of the crossbar.

Spalletti's men were rewarded for their more incisive play when Leonardo Bonucci was unable to cut out Candreva's magnificent low cross from the right and Icardi stole in front of Mateo Musacchio to finish with aplomb.

1 - Mauro Icardi has scored with his first touch in the opp box of the match. Predator. October 15, 2017

Musacchio was a more active participant when he blocked a rasping Perisic drive as Inter sought to press home their advantage, although an equaliser almost arrived against the run of play a minute before half-time.

Kessie unpicked the Inter backline with a fine throughball to Fabio Borini, whose initial low shot was well repelled by Handanovic before a headed follow-up rippled the side netting.

Milan thought they were level in the 49th minute when Musacchio converted the rebound after Andre Silva thumped a shot against the base of the post but the defender was correctly ruled offside.

Cutrone's lively movement was giving Inter much more to think about and he darted to the near post to clip fractionally wide from Rodriguez's cross.

The pressure told in the 56th minute as Suso, who tested Handanovic a few moments earlier with a rasping drive, chose precision over power to curl in from 25 yards.

Matias Vecino thudded wide as Inter looked to hit back but Handanovic's incredible reactions to thwart Bonaventura at close quarters confirmed Milan's position in the ascendancy.

Icardi had other ideas, stealing possession on halfway and powering forward to feed Perisic, who skipped past Musacchio and saw his cross converted with a masterful scissor-kick.

Milan refused to fold and appeared to have their slightly fortuitous reward after Bonaventura flung himself towards Borini's cross and Handanovic erred.

Rodriguez made a brave block to deny Inter substitute Eder in the closing minutes but his final act would be considerably more damaging, leaving Icardi to slot home as Gianluigi Donnarumma guessed incorrectly.