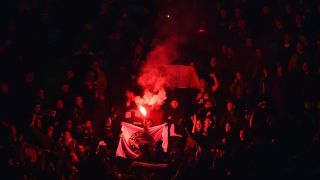 Last month's game at San Siro finished 1-0 in Inter's favour, as Roberto Mancini's side sealed their place in the last 16 by virtue of a 4-3 aggregate scoreline.

In a statement released by UEFA, European football's governing body declared that both clubs had been fined €5,000 for the behaviour of the fans.

The statement also revealed that Celtic had been fined a further €8,000 for the "improper conduct of their team" after Virgil van Dijk was sent off for two bookings in the first half and five other players were cautioned.

Elsewhere, Dynamo Moscow have also been fined €20,000 after their supporters also let off fireworks during the 0-0 draw at Anderlecht in the last 32 first leg tie.