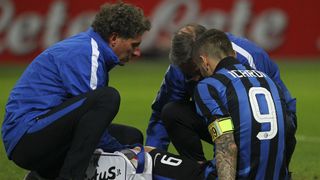 Inter striker Mauro Icardi could be set for a lengthy absence after the Serie A club confirmed he has suffered medial knee ligament damage.

Icardi sustained a sprain to the ligament during Saturday's 2-1 Serie A win over Bologna.

Inter tweeted on Monday to confirm the 23-year-old's injury, which almost certainly rules him out of this weekend's crunch clash against top-three rivals Roma, while reports in Italy suggest the Argentine will be out of action for a month.

A scan reveals is suffering from a medial collateral ligament sprain. He will be reassessed over the coming days March 14, 2016

Icardi has scored 12 goals in 26 Serie A appearances for Roberto Mancini's side this season, helping Inter to fifth in the table with nine games to go.