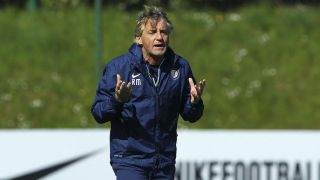 Inter produced a mixed performance in their opening pre-season friendly as the Serie A side clung on for a 4-3 win over Stuttgart Kickers from the German third tier.

A first-half double from Rodrigo Palacio was followed by goals from Marcelo Brozovic and Mauro Icardi as Inter, looking to put last term's disappointments firmly behind them, raced into a 4-0 lead after 29 minutes.

However, some of the side's troubles returned after the break as Kickers struck three times to come close to denying Roberto Mancini's side victory.

Even the introduction of new signing Geoffrey Kondogbia could not lift Inter, the France international playing the final 25 minutes in Brunico.

Palacio – who scored eight Serie A goals last season – gave Inter a superb start with two composed finishes inside the opening 10 minutes – the latter well placed after a neat pass from Icardi.

The Argentine turned provider midway through the half as Brozovic added a third before Icardi slotted home the fourth on the half hour.

Inter did not have it all their own way in the opening 45 minutes, but were saved by the crossbar and Samir Handanovic. Handanovic's half-time replacement Juan Carrizo was less fortunate.

Manuel Fischer pulled the first back for Kickers after 54 minutes before doubling his tally with five to play.

Although only a friendly, Kickers continued to push and they cut the deficit to just one as Andreas Ivan grabbed a third in the final minute, much to the frustration of Mancini.