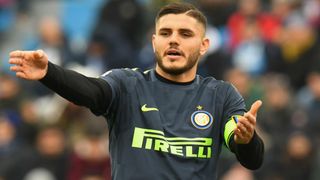 Inter head coach Luciano Spalletti admits he is powerless to stop Mauro Icardi from joining one of Europe's most powerful clubs.

The club captain, who reportedly has a release clause of €110million, has been linked with a host of major sides following his Serie A form, including Champions League winners Real Madrid, Chelsea and Bayern Munich.

Spalletti insists the Argentina forward has not given any indication that he wants to leave, particularly with Inter having snatched a Champions League spot with a dramatic win over Lazio on the final day of Serie A this season.

However, he fears that a small number of top teams could tempt Icardi away from San Siro if they do decide to launch a bid.

"He's happy at Inter and wants to stay, but then there are clubs which, if they decide to take a player, you could have been saying 'I won't leave here' the day before, then the next day they take you and in the end you're happy to go, even though the previous day you were thinking very differently.

"We have to be ready for anything, but for now there are no signals and no doubts about what he wants."

Icardi scored 29 goals in 34 league games in 2017-18, including an equaliser from the penalty spot in that 3-2 victory at Lazio.