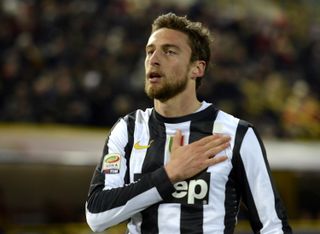 Both sides head into Saturday's game at San Siro having taken six points from their first two league games, with Inter looking revitalised under the stewardship of new manager Walter Mazzarri.

Inter finished a lowly ninth in Serie A last season, although they were still able to take maximum points from Turin with a 3-1 win at the Juventus Stadium in November 2012.

However, the champions duly returned the favour with a 2-1 win at San Siro in March.

Juventus boss Antonio Conte will be without midfielder Marchisio for this season's trip to Milan, as the Italy international continues to recover from knee ligament damage sustained in the Supercoppa Italiana win over Lazio last month.

Still, Marchisio has faith that his team-mates will be able to pull off a result that he believes would represent a significant early-season sign of intent.

"For us to beat a strong team like Inter on the third day of the championship would be a nice coup," he said.

"I am sorry I won't be there, but my team-mates are doing well without me. I have full confidence in them.

"I expect them to make the most of what little time we have to prepare for the challenge of San Siro."