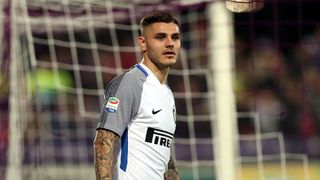 Inter could offer Mauro Icardi a new contract to fend off reported interest from Real Madrid, according to sporting director Piero Ausilio.

Club captain Icardi signed a five-year contract at San Siro in October 2016 but continues to be linked with a move to Madrid due to his prolific form in Serie A.

It has been claimed in the Spanish media that the European and LaLiga champions will trigger a release clause in the 24-year-old's contract – reportedly set at €110million – in the close-season.

While Ausilio acknowledged Inter could be forced to accept a bid, he is confident Icardi wants to remain at the Serie A giants and suggested fresh terms could be offered.

"We are not worried. Aside from the fact there is a clause that is valid for abroad until July, Mauro and us want to stay together and achieve our objectives," he told Mediaset Premium prior to Inter's 1-1 Serie A draw with Fiorentina, in which Icardi netted.

"I won't rule out that, without any appointments set right now because he has a very long contract, we could in future sit down and talk about something different."

Head coach Luciano Spalletti said this week Inter were not looking to sign players in the January transfer window amid links to Henrikh Mkhitaryan and Simone Verdi.

Ausilio, though, admitted an interest in Barcelona winger Gerard Deulofeu, who spent the second half of last season on loan at AC Milan and has struggled for game time under Ernesto Valverde this term.

"There have been no formal offers for Deulofeu, but we are paying attention to the situation," said Ausilio.

"If there are the conditions to try something, we know the characteristics we are looking for. Deulofeu could be the right profile, but he isn't the only one."