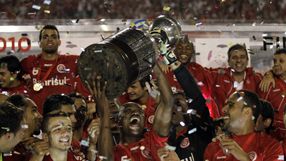 Inter, who will take part in next month's Club World Cup in Abu Dhabi, were drawn with Wilstermann of Bolivia, Ecuador's as yet unknown second participants and the winners of a qualifying tie between debutants Chiapas of Mexico and the third qualifier from Peru.

Santos, twice winners in Pele's heyday in the 1960s, are top seeds in Group Five as winners of the Copa Brasil.

A majority of the teams who will take part will not be known until next month when league championships wrap up around South America.

The competition will start on Jan. 22 with six qualifying ties and end on June 22, a week before the Copa America for national teams to be played in Argentina in July.

A novelty this year was seeding teams from Colombia, Ecuador, Peru and Venezuela for the first time along with Argentine and Brazilian participants. In 2012 the four will be replaced by seeds from Chile, Bolivia, Paraguay and Uruguay.

The winners of the Copa Sudamericana, the region's equivalent to the Europa League, will qualify for the Libertadores Cup for the first time.

Goias, who reached the final by eliminating Luiz Felipe Scolari's Palmeiras on Wednesday in an all-Brazilian semi-final, will be allowed to enter even though they were relegated from the Brazilian first division last weekend.

They will meet Independiente of Argentina or Ecuadorean holders LDU Quito in the final.

The draw at the South American Football Confederation's Paraguayan headquarters was preceded by an emotional ceremony in which an award was made to former players Salvador Cabanas and Franklin Lobos.

Cabanas, a former Paraguay striker, was shot in the head in a Mexico City bar in January and has been undergoing rehabilitation, while Lobos is one of the 33 workers rescued after the recent Chilean mining accident.