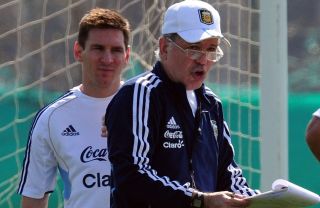 Barcelona striker Messi is the main absentee from Sabella's squad for the match on Friday after being ruled out with a hamstring tear, but the coach is hoping to see other members of the team step up and put themselves in contention for a FIFA World Cup place.

After sealing their spot in Brazil on goal difference from Uruguay, Ecuador may also take the chance to use fringe players for their third meeting with Argentina in the last 17 months.

Argentina come into the match on the back of a 3-2 defeat to Uruguay in mid-October, a result that ended a 13-game unbeaten run, but Sabella remains positive they can return to winning ways without the talismanic Messi.

"You have to be optimistic and not to give more concern," he said. "We will come and play 4-3-3 even without Messi, but I can make a tactical change in these two games.

"The goal, besides winning, is to give (chances to) those who have played less and see those who never did.

"Ecuador has a very good team, physically exuberant, with very good movements. I do not know what to expect (with their selection) because they will be putting together the final list for the World Cup."

Reinaldo Rueda's Ecuador have suffered a slump in form of late, with their last eight games yielding just one victory.

In their two meetings during the qualifying campaign, Argentina won 4-0 in Buenos Aires, while the honours were shared in Quito.

Sabella has called up Nicolas Otamendi and Facundo Roncaglia, while Bordeaux defender Lucas Orban would earn his first cap if selected.

Ecuador have a strong squad for the clash, including Manchester United winger Antonio Valencia and Lokomotiv Moscow striker Felipe Caicedo.