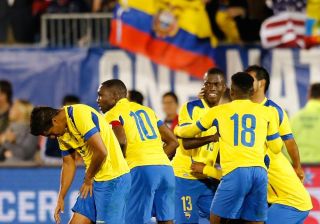 In-form striker Enner Valencia was also on target in the opening half before Rafael Burgos pulled a goal back for El Salvador from the penalty spot on the stroke of half-time.

But that proved to be nothing more than a consolation as Valencia netted his second 17 minutes from time - taking his tally to three goals in two games - and substitute Cristian Penilla completed the scoring late on with his international strike.

Colombia coach Sixto Vizuete made five changes to the team that drew with United States on Friday, with goalkeeper Alexander Dominguez, Jonathan Gonzalez, Plata and Junior Sornoza called into the starting XI.

Veteran defender Ivan Hurtado, 40, was also named in the side and wore the captain's armband after four years away from the national team in an emotional send off.

El Salvador went into the clash unchanged, with Albert Roca opting to stick with the same 11 players that lined up in the 3-0 defeat to Colombia last week.

After a high-tempo start to the match, Plata opened the scoring in the 16th minute, albeit with some help from a wicked deflection.

Plata attempted a shot from outside the penalty area and it somehow ended up in the back of the net.

Valencia made it 2-0 just two minutes later, coolly placing the ball beyond Henry Hernandez after the El Salvador keeper's clearance failed to clear the halfway line.

The gulf in class was apparent as Plata gave the South Americans a three-goal lead in the 25th minute, beating his opponent before tucking the ball underneath Hernandez for his second of the match.

Juan Paredes gave away a penalty on the stroke of half-time for handling the ball in the area and El Salvador striker Burgos managed to squeeze the ball past Dominguez.

The second half was interrupted by substitutions but Ecuador eventually got their fourth with 17 minutes remaining, Valencia cutting inside the box and placing the ball into the bottom corner.

Penilla came off the bench the bench and scored a goal of his own in the 83rd minute, weaving his way past two defenders before firing low and hard into the net.