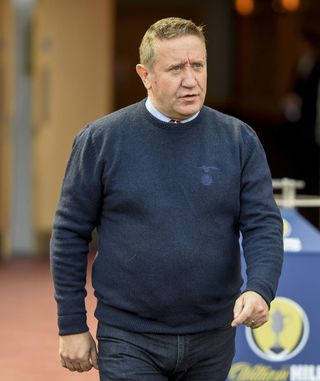 Inverness have claimed Dundee made an “unsolicited” approach for manager John Robertson.

The Dens Park club are searching for a replacement for Jim McIntyre who left the club after relegation from the Ladbrokes Premiership.

Championship side Inverness claim the direct approach to Robertson was made on Saturday, the day after the Highlanders lost a promotion play-off semi-final against Dundee United, with the Caley boss making it known to the club’s chief executive officer Scott Gardiner.

Inverness released a statement on their club website which read: “The club can confirm that manager John Robertson was directly approached by Dundee FC on Saturday evening.

“Within minutes of this approach, John notified the club and confirmed to our CEO that he had no desire or intention to speak to Dundee FC about their vacant managerial position.

“He did not reply to, nor acknowledge this approach. To be 100% clear, this approach from Dundee FC was entirely unsolicited and given that it was less than 24 hours after a draining Premiership play-off semi-final defeat, entirely unwelcome.

“The club itself was not formally contacted by Dundee FC until late Sunday afternoon when a senior member of our club staff was spoken to by the DFC club secretary.

“Following this phone call, he received an email formally asking for permission to speak to John with regards the vacant managerial position at Dens Park.

“The member of staff contacted our CEO immediately, at which point and with knowledge of the previous day’s direct approach, he immediately contacted and denied DFC permission to have any further contact with our manager.”

Press Association Sport has tried to contact Dundee for a response to Inverness’ claims.