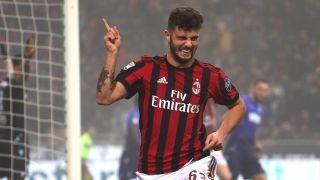 Lazio boss Simone Inzaghi said it was "incredible" Patrick Cutrone's goal was allowed to stand in his side's 2-1 loss to AC Milan.

The 20-year-old broke the deadlock at San Siro on Sunday as he glanced in Hakan Calhanoglu's cross, although replays showed the ball went in off his arm and not his head.

The goal was allowed to stand and Milan went on to claim a third Serie A victory in a row, with Giacomo Bonaventura's header proving decisive after Adam Marusic had levelled the match.

Inzaghi complained in December that VAR had robbed Lazio of seven points due to controversial decisions in games against Inter, Fiorentina and Torino, and he was equally angry after the Cutrone incident.

"It's incredible. Honestly, I didn't notice it [at the time]. They'll have to explain this one to us, too," he told Mediaset Premium.

"They told me on the touchline and I asked Cutrone after the final whistle. He said it was deflected but it obviously wasn't.

"It's a shame. Once again, we have to deal with this situation. The pictures speak for themselves.

"I saw a very good performance in the second half and one that merited at least a point, but that's football, you have to put the ball in the net. Milan did, and we didn't."