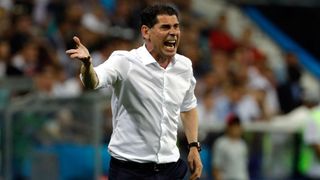 Isco has praised interim Spain coach Fernando Hierro for having the wisdom not to make significant changes since taking the reins from the sacked Julen Lopetegui, as they aim to get their first World Cup win against Iran on Wednesday.

Hierro was thrown into the deep end after being appointed just before the finals started, replacing Lopetegui, who was fired for accepting a future role at Real Madrid without telling the Royal Spanish Football Federation (RFEF).

His first game in charge saw Spain's World Cup opener end in a brilliant 3-3 draw with Portugal, though the scoreline perhaps did not tell the full story, as the European champions were helped by a rare David de Gea error and an exquisite late Cristiano Ronaldo free-kick.

Given the tumult in the Spain camp, things could easily have gone horribly wrong for them against Portugal, but – according to Isco - Hierro has done the right thing by using Lopetegui's tactics as the foundation for his own.

"I know Fernando since many years ago," Isco told reporters in Krasnodar on Monday. "We happened to meet at Malaga, then in the national team.

"He knows what he's doing. There haven't been many changes because he knows that we work well with what we already have.

"It has been tough for him to face this without expecting it, but I see him very well, very concentrated and he trusts us a lot."

Spain are strong favourites for the Iran clash in Kazan, as they go in search of their first group-stage victory.

But Iran will be boosted by their 1-0 triumph over Morocco on matchday one, a win which has seen them top Group B.

And while goalkeeper Alireza Beiranvand recognises few will fancy Iran to add to their current points tally, he is in a defiant mood and insists Spain will be in for a battle.

"Everybody knows that Spain is one of the greatest teams in football history, and one thing that we can guarantee is that the Spanish team will not have an easy time against us," he told reporters.

"Everybody knows that our boys are fighters, and we will fight and we will keep our concentration until the very last second of the match."

The most naturally gifted player in the Iran squad, Azmoun – who plays his football in Kazan for Rubin – was fairly prominent in attack against Morocco. But if they are to really threaten Spain, he will need to be at his very best.

Diego Costa was the star against Portugal with a brace, but Iran are likely to be rather more compact than the European champions. With that in mind, Spain might need creative ingenuity to break them down and that is where the crafty Isco is at his best.

- Iran are winless against European opposition at the World Cup, having lost five of their six previous fixtures (D1).

- Spain have been eliminated at the group stage in two of the last three World Cup tournaments in which they’ve failed to win their first match (1998 and 2014) – however, they won the tournament on the other occasion, doing so in 2010 despite losing their first match to Switzerland.

- Diego Costa has scored eight goals in his last eight international starts for Spain – he scored with both of his shots on target in their 3-3 draw with Portugal.