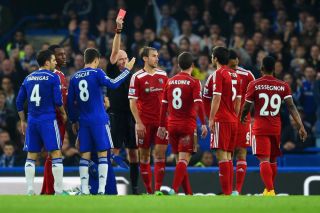 Yacob was on the field for only 29 minutes in his first Premier League start of the season after he was dismissed for a challenge on Diego Costa at Stamford Bridge on Saturday.

The midfielder argued that he had got the ball, but Irvine could understand why referee Mason gave the Argentinian his marching orders.

He said: "I can see why he sent him off. I don't think Claudio was trying to do any damage to Diego Costa, he was trying to win the ball, but the rules are such that if your feet leave the ground with both feet you're not in control.

"It was a big, big task from the moment Claudio was sent off."

Costa and Eden Hazard had already put Chelsea two goals up when Yacob saw red as they caused Albion all sorts of problems and Ben Foster was called upon to make a string of saves.

Irvine felt that Costa's strike should not have been allowed to stand, but knows his side's defending was not good enough as they were swept aside in the first half.

He added: "Obviously this is a really difficult place to come. They're a top team. We were looking to get off to a good start and obviously the first goal after 11 minutes made it hard.

"We certainly had to have a shape about us and have discipline, but to lose those first couple of goals was obviously against what we were trying to do.

"We had a gameplan which was made more difficult by the first goal which I think was offside. But the second one I was disappointed about - we pride ourselves on being organised at set-pieces and we weren't as organised as we should have been."

Albion have now won just one of their last six top-flight matches and sit 13th in the table, just three points better off than third-bottom Burnley.