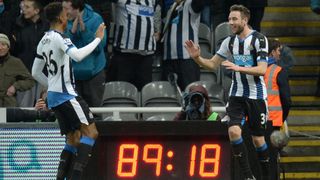 Newcastle United defender Paul Dummett revelled in a draw that felt like a victory after his late equaliser saw his side draw 3-3 with Manchester United.

Dummett drilled in a dramatic late leveller to salvage a point for the hosts at St James' Park as they came from behind against Louis van Gaal's men.

The Wales international said the equaliser felt more like a winner for Newcastle, who remain in the Premier League's relegation zone.

"Definitely at the end [it did], especially when we were 2-2 and we conceded right near the end. When we go 3-2, it's never a nice feeling, but to score at the end it feels like a victory," Dummett told BT Sport.

"When we're down the bottom, you need every point you can get."

Newcastle fell behind to a Wayne Rooney penalty and Jesse Lingard goal, before Georginio Wijnaldum and Aleksandar Mitrovic, the latter via the spot, restored parity.

Rooney appeared to have won it for the visitors with a fine finish in the 79th minute, but Dummett drilled in an effort from just outside the area to earn Steve McClaren's men a point.

Wijnaldum lauded his side's fight as they ended a four-game losing run in all competitions.

"The games earlier in the competition didn't go so well. We learned from that," he said.

"We learned that you never lose a game until the ref blows the whistle. That's what we do. Just fight until the end and then we see what we've got, if we have a win, draw or loss, but we always fight."