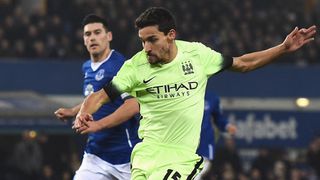 Manchester City winger Jesus Navas is certain he should have been awarded a penalty during Wednesday's 2-1 defeat at Everton.

Goals from Ramiro Funes Mori and Romelu Lukaku either side of Navas' equaliser mean Manuel Pellegrini's side are on the back foot ahead of the League Cup semi-final second leg at the Etihad Stadium on January 27.

Pellegrini hit out at the officials for their failure to award Navas a penalty after he went down under pressure from Kevin Mirallas in the second half, as well as claiming Lukaku should have been flagged offside in the build-up to the opener.

Navas did not want to discuss the decision at the same length as his manager, but was certain he should have been given a spot-kick prior to scoring his goal.

He told the club's official website: "Yes, it definitely was a penalty, but I don't want to talk too much about these things, we need to focus on the next game.

"I am very happy with the goal, but obviously we couldn't get the victory. We have the second leg at home and we are going to work really hard to get through to the final and get the cup.

"I tried to do what Manuel told me to do. Initially it was to get the draw and I managed to get the equaliser. All the team performed really well, it is a pity that we couldn't win.

"We knew that in this competition the semi-final is two legs and in these kind of situations we need to be very clever.

"Obviously we wanted to win here, but we conceded the two goals and could not do that. Everton is really tough opposition and they played really really well."

Manchester City face Norwich City at Carrow Road in the FA Cup on Saturday, before they face Everton again – this time in the Premier League – on Wednesday.