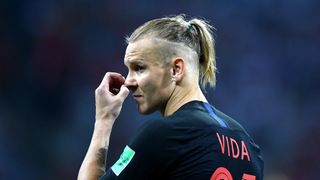 Domagoj Vida says his pro-Ukraine comments in a social media video were not a "political message", with the Croatia defender having avoided a World Cup ban.

FIFA warned Vida over his conduct after he and former Croatia international Ognjen Vukojevic appeared in a video after the quarter-final shoot-out victory over hosts Russia.

Vida was filmed using the phrase "Glory to Ukraine", which has been used by Ukrainian anti-Russian nationalists, with FIFA's disciplinary code prohibiting "political slogans in any form".

FIFA confirmed on Sunday that Vida has been given a warning, meaning the defender will be available for selection when Croatia face England in Wednesday's second World Cup semi-final.

And the Besiktas centre-back has explained his comments were meant purely as a message of gratitude for the support he has received from fans of his former club Dynamo Kiev.

"I regret that some media representatives have interpreted our communication in such a manner," Vida said in a statement released by the Croatian Football Federation.

"It was definitely no political message, but a simple thank you for all the support from Ukraine, where Vukojevic and I spent a number of years. Our intention was not to offend anyone.

"Throughout my career, I have had team-mates from many countries and I respect them all, and just as I have many friends in Ukraine, I have a number of them in Russia - and I am proud of all of them.

"I am happy to speak the Russian language, I enjoy Russian hospitality at the 2018 World Cup and I sincerely hope that this message will not be understood as anything else but an expression of gratitude to our friends in Ukraine for their support - not in the match against Russia, but during the entire World Cup."

The Croatian Football Federation has warned current and past players to avoid "any messages that could be politically interpreted in the future".