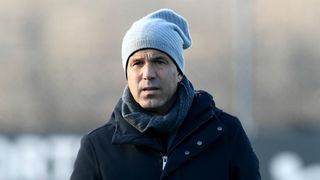 Italy Under-21 boss Luigi Di Biagio has been installed as interim head coach of his country's national team.

The former Roma and Inter midfielder, who was capped 31 times by Italy, will take charge of next month's friendlies against Argentina and England.

A statement released by the Italian Football Federation (FIGC) read: "Following the meeting held today at the headquarters of the Italian Football Federation in Rome, in the presence of the Extraordinary Commissioner Roberto Fabbricini and his deputy Alessandro Costacurta, it was decided to entrust to Luigi Di Biagio the position of national technical commissioner in view of the two international commitments next March."

Di Biagio has been given his chance to press claims for the job despite lacking top-flight coaching experience.

The Azzurri have been without a coach since Gian Piero Ventura's departure in the aftermath of their failure to qualify for the World Cup.

Play-off defeat to Sweden marked the first time in 60 years that four-time winners Italy had missed out on a place at the showpiece tournament, and appointing a successor has been complicated by the failure to elect Carlo Tavecchio's successor as FIGC president.

Fabbricini, general secretary of the Italian Olympic Committee (CONI) was belatedly installed as emergency leader of the FIGC last week.

Roberto Mancini and Antonio Conte have both been touted as full-time targets for the role but, despite speculation over the latter's future at Chelsea, ex-Juventus boss Conte has distanced himself from the prospect of returning to Italy's bench.

"I can tell you that Costacurta is a friend. We played together with the national team in 1994 [at the World Cup]," he told reporters last Friday.

"But, maybe he forgot that I still have 18 months of contract with Chelsea. My intention, my will, my desire is to respect this contract."