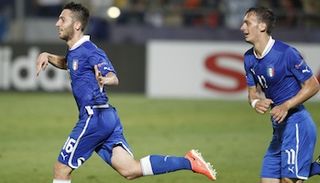 A goal by Italy midfielder Andrea Bertolacci of Genoa in the fourth minute of added time cancelled out a 90th-minute penalty by Norway defender Stefan Strandberg, to see the Italians finish top of the group with the Norwegians through as runners-up.

Both must await the outcome of Wednesday's Group B clash between defending champions Spain and the Netherlands, who have both already qualified, for the semi-final line-ups to be known. Germany and Russia, the other two Group B teams, have been eliminated.

In Tuesday's second Group A match, one of the pre-tournament favourites England went home in humiliation after a 1-0 defeat by Israel to leave coach Stuart Pearce's job in real jeopardy.

Despite both teams already being out, over 22,000 spectators turned out in Jerusalem to watch the clash for third place in the group, the best-attended match of the tournament so far.

England were more dominant in the first half and had most of the chances throughout the match but were let down by wayward finishing.

They were eventually punished when Ofir Krieff gave Israel the lead in the 80th minute with a powerful left-footed shot from 18 yards that beat England goalkeeper Jason Steele.

The Israelis, considered the weakest team in the tournament, celebrated wildly and tossed coach Guy Luzon into the air in an ecstatic farewell celebration. He will take the reins at Belgium's Standard Liege next season.