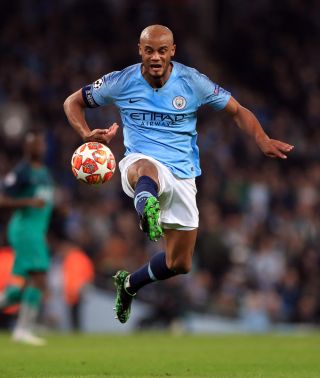 Vincent Kompany is to miss his own testimonial due to a hamstring problem.

The former Manchester City captain had been due to feature in the star-studded charity match at the Etihad Stadium on Wednesday.

But, much in keeping with the latter half of Kompany’s City career, the defender has been curtailed by a muscular issue.

Even he sees the irony…. Vincent Kompany to miss his own testimonial through injury, but stresses there'll be plenty of @ManCity stars on show to help him raise much needed funds for @tackle4mcr tonight @PAdugoutpic.twitter.com/i32wLnukdZ— Rich McCarthy (@VJRichMcCarthy) September 11, 2019

Kompany said: “Unfortunately I can’t start or even play. It’s typical of me! I have a slight hamstring injury and can’t risk it.

“But there are plenty of awesome players to be watching and it is about a celebration. To say goodbye, it doesn’t have to be on the pitch. We are doing it for an unbelievable cause.

“And I will be there for David Silva testimonial!”

Kompany, 33, joined City in 2008 and left after winning his fourth Premier League title with the club at the end of last season.

“Tackle4MCR is an opportunity and I believe in it. We stand behind this cause.” @VincentKompany at his pre match press conference pic.twitter.com/g5xONOa6jD— tackle4mcr (@tackle4mcr) September 11, 2019

Although frustrated at not being able to play in the match between a City XI and a Premier League All-Stars team, Kompany pointed out that the top priority was to raise money for his homelessness charity Tackle4MCR.

For that he is pleased that so many former Manchester United players, old rivals, have agreed to take part.

He said: “We are specifically dealing with homelessness in Greater Manchester. You can’t have a successful project without Manchester United involved. We have our differences – that is clear – but if we can get together for these sort of events the city is stronger.”

With Aymeric Laporte now facing a lengthy spell out injured, the lack of cover could be exposed but Kompany is confident Pep Guardiola’s team will cope.

He said: “By losing Laporte you lose a big player. You need big players in the bigger games but the key strength of this Manchester City team is relying more on the system than the individuals.

“I don’t see City weakening. Pep is way too aware of this danger to let it happen.”

At a press conference to preview the match, Kompany was also asked who he felt was the best defender ever to have played in the Premier League. His surprise answer was Liverpool’s Virgil Van Dijk.

Kompany said: “I go back to players that really impressed me when I played against them, central defenders, I would bring it back to Virgil Van Dijk.

“Being a defender is how you make your team more solid. The Liverpool before Van Dijk and after – it is a completely different set-up.”